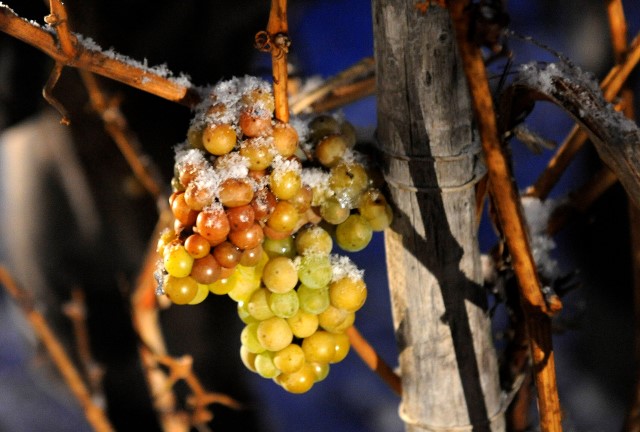 The wait for the deep freeze was worth it after all. As the German Wine Institute (DWI) announced, on the 18 and 19 January many estates in almost all German wine growing regions were able to harvest grapes (mainly Riesling, Silvaner and Pinot Noir) for the production of Eiswein or ice wine. With temperatures down to minus eleven degrees Celsius, the conditions were perfect, they reported. To qualify for an Eiswein harvest, the thermometer must read at least minus 7 degrees Celsius – the colder the better, as the concentration of grape juice in the berries is increased by low temperatures. The sugar content of this year´s Eiswein was therefore high, with must weights of up to 220 degrees Oechsle. However, with yields ranging from 50 to 300 litres per estate, only relatively small quantities could be brought in.

Over the last weeks, most vintners had already given up hope of making Eiswein. They had either already harvested the grapes as “Beerenauslese” or even been forced to discard a portion, despite the fact that the fruit in 2015 was very healthy and thus ideally suited for an Eiswein harvest. That is why many estates took the risk last year and left the berries to hang on the vine.

German Eiswein are a true speciality and a rarity – the last Eiswein harvest of any size was in 2012. Ice wines from Germany´s wine regions usually have high natural sugar levels of well over 100 grams per litre, but in contrast to dessert wines from southern countries are relatively low in alcohol – often with only seven percent. They make an excellent aperitif and are a perfect complement to fruit-based desserts and ice-cream or sorbets.

Below is a list of estates which had a successful Eiswein crop in 2015.