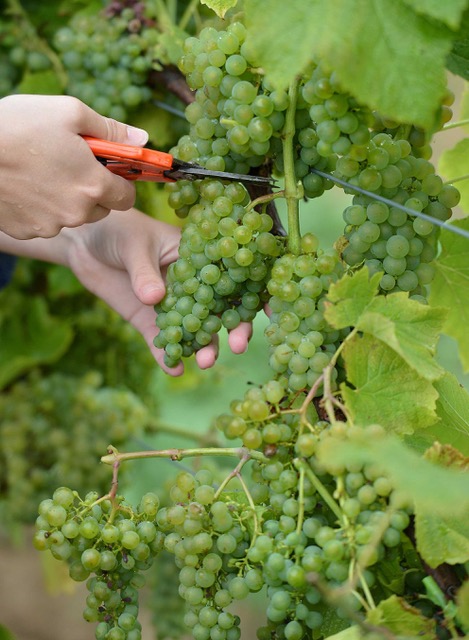 On August 10th, this year’s harvest for partly fermented new wine – so called Federweisser – commenced in the Pfalz region (Palatinate). At this comparatively early harvest time, the very healthy grapes of the early-ripening variety ‚Solaris‘ reached high density with over 100 degrees Oechsle.

Vegetation ahead of average records

As reported by the German Wine Institute, the vines are currently about a week ahead of the previous year in terms of their maturity. Depending on the region, the start of the main vintage is expected as early as late august to early september. Late ripening varieties such as Riesling will probably not be ready for harvesting until mid to late september – depending on the individual growing areas.

This year the vines started growing very early. After a warm and sunny spring, they sprouted almost two weeks earlier than the long-term average. In the Rheingau region there was even talk of the second earliest bud emergence after 2014 since the weather records began. This year, the vines also began to bloom in warm locations at the end of may, eight to ten days before the 30-year average. Therefore, an early start to harvest was predictable even then, because the grapes are ready for harvest around 90 to 100 days after flowering.

However, late frosts around the date of the „ice saints“ between may 10 and 15 have led to considerable frost damage in a band from North Baden via North Württemberg and Franconia to Saale-Unstrut and Saxony. In the two eastern growing areas in particular, relatively large yield losses are expected.

The general drought is also widespread in the German vineyards. There has been repeated rainfall in the last few months, but it was distributed very differently from region to region and often only ensured brief relaxation. The water supply is correspondingly heterogeneous in the individual wine regions at the moment. Thanks to their deep roots, most of the older vineyards are still in relatively good shape. Young plants and vineyards on soils with little water storage, however, sometimes show symptoms of stress, even in view of the current extreme heat waves, and some of them have to be irrigated.

As in the previous year, the temperatures of over 30 degrees Celsius (86+ Fahrenheit) have already caused sunburn damage to the grapes across all areas. They only reduce the yield, but have no influence on the quality of the wine. How severe the damage was can only be estimated after the hot spell.

All in all, the grapes in the German vineyards are very healthy at the moment, which means that you can expect beautiful fruity spring whites. However, the weather in the next few weeks will be decisive for the quality of the vintage, for which the winemakers would like to see a little rain first and then a nice Indian summer.

Accordingly, vintners are cautiously optimistic about a promising high quality 2020 wine year with good yields. To what extent the nationwide total harvest will move above or below the ten-year average of 8.7 million hectoliters remains to be seen.