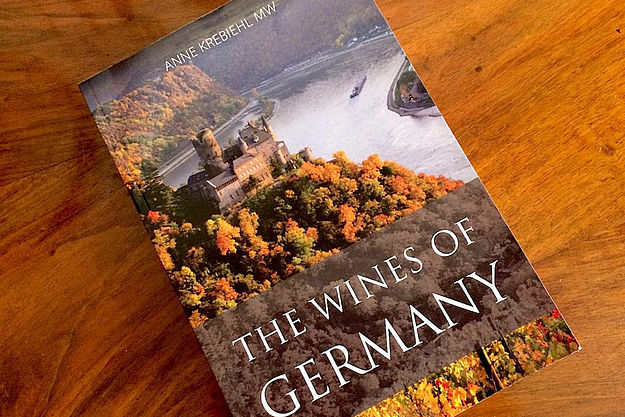 She is clearly a genuine enthusiast for German wines: Anne Krebiehl, author of ’The Wines of Germany’ wins the ”International Wine Book of The Year”-Award at the Louis Roederer Wine Writers’ Award 2020.

In her new book she explains Germany’s climb back to the top. However, Krebiehl also notes which changes are needed if ’Wines of Germany’ are to continue their successful path. Regarding the Award the author states:

”Nobody was more surprised than me at this win- and I am over the moon! Since it was a virtual announcement, I was able to rewind the YouTube transmission to see that this was real. I did not expect my rather nerdy book to win at all and it is particularly sweet to receive this accolade in the last year of these remarkable rewards. I can only thank Champagne Louis Roederer, the entire team at MMD UK and this year’s judges for this honour. Researching and writing was hard work but I felt there was so much to say about my home country, its diverse regions and cultures and above all its chequered history. It is beautiful to know that the judges found it so readable!”

In assessing the damage inflicted by the last century, she notes that, “it is only now that Germany is emerging from the convulsions of the twentieth century to become its true self and allow the uniqueness of its vineyards and diverse landscapes to take centre stage”.

On that stage are three key players: the reclaiming of Riesling in its true form, the increasing viability of red wine, particularly Spätburgunder, and the revival of traditionally crafted Sekt. Sweetness in wine had long been the “German curse”, as Krebiehl puts it, but today’s producers, notably in the Mosel – everywhere in fact, are turning out the most “thrilling, diverse, alluring, unique and spine-tingling” Rieslings in the world.

Climate change, whilst not entirely problem free for Germany’s growers has allowed a third of its hectarage to be devoted to red wine grapes. Other producers have recently begun unpicking the damage to the international reputation of Sekt inflicted by mass production, creating artisanal Sekts that sit perfectly with today’s fashion for the boutique and hand-crafted and benefit from the current popularity of sparkling wines.

Thorough overview of German wine culture, past and present

Krebiehl refers modestly to her book as “a sketch” but in fact it provides an exceptionally thorough overview of German wine culture, past and present. She profiles a significant cross-section of producers in all wine regions, from the famed Mosel slopes to the lesser known regions of Sachsen and Saale-Unstrut, and it is through their stories that we gain the clearest view of where German wine has been, where it is now and where it’s heading.

While Krebiehl is clearly a genuine enthusiast for German wines she also notes that changes are needed if Germany is to continue its climb back to the top. Updates to the wine law will play an important role in the continuing revival, in order to move to a more provenance-based and easily understandable model. The book’s overall tone is optimistic; Krebiehl is excited about the future for German wine and hopes the book will inspire readers to begin their own vinous explorations. After all, at the end of the nineteenth century Germany’s wines, particularly its Rieslings, were among the most expensive and sought after in the world.

German-born but London-based, Anne Krebiehl MW is a freelance wine writer and lecturer. She is the contributing editor for Austria, Alsace, Burgundy and England for US Wine Enthusiast and also writes for trade and consumer wine publications such as The World of Fine Wine, Decanter, The Buyer, Falstaff and Vinum. She lectures, consults and judges at international wine competitions and is a panel chair at the International Wine Challenge. She completed her WSET Diploma in 2010 and was admitted to the Institute of Masters of Wine in September 2014. Anne has helped to harvest and make wine in New Zealand, Germany and Italy.

The Wines of Germanywas first published by Infinite Ideas on 23 September 2019.

Take advantage of theAWARD40 Voucher here (until the end of september 2020): http://www.infideas.com/buy-the-wines-of-germany/